This is the second time Visible Universe have recorded, this time to capture their debut gig. Big on improvisation without rehearsal, they’ve only played together twice so far, each session having been recorded and released.

“But who is this Visible Universe?”

Visible Universe is myself and Alex Charles, soundscaping as if our lives depended on it. Often they do. I handle guitar drones, while Alex provides vocal drones – in this way, we play off each other, the drones intertwining so much that it becomes hard to distinguish one sound source from another. Started on a whim, after a Senor Citizen rehearsal, the result was so positive that we decided to carry on in the same vein. Massive PA’s, smoke and lighting being our (my) ultimate goal.

‘Live at Ort’ is now available from Stray HQ and Bandcamp.

The MUKEBOX in all it’s glory

Occasionally I make the effort to write some code. One thing I wanted to try was a browser-based audio improvisation tool. Something very simple and lightweight, otherwise I may as well just fire up Ableton.

The original idea was to display an array of samples that could be triggered asynchronously and made to loop, as required. The screen capture you see above is pretty much how I imagined it would look. Each big square has a sample assigned to it. Click the square and the sample plays. It got called MUKEBOX because, it’s sort’ve like a jukebox and my solo ‘music’ project is MUTATE… see? A true original thinker.

Techy time. So, I wanted to playback several samples asynchronously, from a browser. A little research and I found that I could utilise the vaguely supported HTML5 audio routines to do this. With a little help from some multi-channel example code published by Thomas Sturm, I expanded, threw a GUI together and quickly recorded some audio to take the samples from.

Limitations so far: Hmmm. Well. OK, so HTML5 audio is vaguely supported. Firefox does a great job of rendering MUKEBOX – once the samples have loaded, they can all be triggered, with 16 audio channels being available. Samples are stacked on top of each other to play from start to finish, until the channels are all busy. So, you can playback one of the samples sixteen times if you like – just click it a load of times. Sixteen instances will be played, layered on top of each other, each sample playing from its’ beginning at the point in time at which you clicked, until its’ end. It doesn’t work for me in Chrome. Which is sad ‘cos I like Chrome. Other browser support is, well, vague. Try it.

The other biggie is that HTML5 audio support is problematic when it comes to the MP3 format. Google it – I can’t be bothered to explain. So all the samples are WAV’s. Which are obviously bigger than MP3’s and so I had to take the decision of not using really long pieces of audio. To limit filesize, each sample is approximately 30 seconds long and mono. Of course, if ran locally, the WAV’s can be as long as one likes, in luscious stereo, but for on-line use I wanted to be realistic. When on-line, one has to wait a while for eight 30 second WAV’s to load. I may well make the off-line version available to download at some point. If enough people ask, I’ll make the effort.

Future: I haven’t managed to get the samples to loop yet, but I will do at some point. There are some other tweaks I’d like to add, such as visual feedback denoting that a sample is playing and maybe even a progress bar of some sort for each sample. But then, maybe that would spoil some of the ‘chance element’ you get with this current version. As a tool, it’s pretty effective and useful in the live environment. It’s also not a major resource soak, so a lot can be done with little – a recurring interest of mine.

Please, go play with the MUKEBOX. Feedback is very welcome! 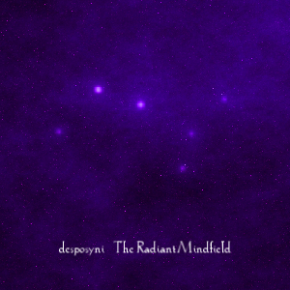 Performers rarely debut with a live recording, but in this case that’s exactly what we’re going to do. Desposyni is a collaborative project between myself and Portuguese Noise Queen, Hyaena Fierling Reich. ‘The Radiant Mindfield’ was recorded live in London, earlier this year. Having enough material for several albums already, we had our debut release planned – that was, until this recording came along. So pleased were we with how well the gig went, it became apparent that this had to be our first release.

No overdubs – this is the live Desposyni sound. Post-production is limited to eq and compression. Completely improvised, each performance is different; unique.

Thanks go to Alex of the wonderful Black Square netlabel, along with Tim Drage and Max Leonard Hitchings, who kindly organised the gig.